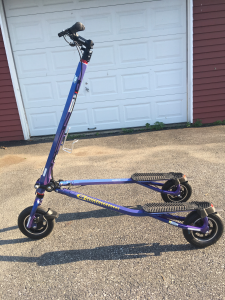 I am writing this just over a year after Trikke announced the much-anticipated T10 Roadster. Although this rumored mid-sized model was first conceived a decade earlier, the Trikke community ratcheted up demand after the T8 Sport and T12 Roadster ceased production. Trikke Tech revealed the T10 as a conceptual design only, with little to go on besides computer renderings, a list of specifications, and faith in inventor Gildo Beleski’s engineering skills. There was no real world prototype and no user reviews, just a Kickstarter campaign with a greatly discounted price ($810 versus the post-production $1,100), the rider’s choice of serial number, and a commemorative t-shirt. There was no doubt I wanted one, so I placed my order for a blue one in August then waited patiently with everyone else as the campaign wrapped up and production began.

The “First Edition” T10 Roadsters finally arrived in California in late June, and by now most (if not all) of the pre-orders have been delivered. It has truly been “Christmas in July” for those of us eager to try out the first new body-powered Trikke produced in nearly a decade. A beautiful blue T10 with serial number 023 was waiting on my porch when I returned from work on July 12, though an evening commitment forced me to wait until the next day to assemble it and the day after that to ride it.

This is the first of two introductory articles I am writing about the T10 this weekend. This one will cover the new features and assembly; tomorrow’s will cover my first impressions over my first two rides. But for those of you eager to skip ahead and know what I think, all I can say is . . . it was worth the wait!!!

The first thing you notice about the T10 (apart from the insanely gorgeous paint job) is the new frame design. Stout, hexagonal tubes are now used on the entire frame giving the T10 added strength and durability. Though still made from lightweight aluminum, they are designed to avoid the cracking issues that had begun to plague some of the older T12’s that have seen heavy use. The steering column is now a single piece with an upgraded headset with sealed bearings. The T10 uses the same V3 cambering mechanism as the Trikke Pon-e, and the mechanism is much like the late-model T8 Sport. As a finishing touch, the T10 incorporates a small plate welded over the front fork that prevents the handlebars from over rotating and tangling up the brake lines. 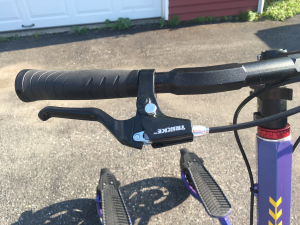 The new, flat handlebars are a mix of hexagonal and round tubing which give the T10 a sleeker look from prior models. The ergonomic hand grips securely fasten with small hex bolts, making them easy to adjust. Much appreciated are the inclusion of parking brake levers which were typically my first upgrade on prior Trikkes to keep them from rolling away every time I stopped to take a break. Riders are no longer constrained to several pre-set handlebar heights set by the notch and lock pin; instead the column can be adjusted to any position the rider desires. The two rounded tube sections near the center of the handlebars provide a place to mount accessories such as a phone holder, GPS unit, or front headlight, though the real estate is a little limited compared to the gull wing bars that often had extra mounting bars near their base. There is also extra space designed in for those who want to shift over the brake levers and handgrips to install bar ends, a popular upgrade in the riding community.

If you’re already a Trikke enthusiast, you know that Trikkes are named for their tire size and the T10 is no exception. The T10 rides atop three lightly-treaded 10” x 2” tires, the same as the front wheel on a Pon-e Lite. Replacement tubes and tires are readily available in this size, as it is commonly used on other gas and electric powered scooters. When ordering tubes, just be sure to purchase the ones with bent stems so that they fit within the rim.

The brake system on the T10 is by far the biggest change from prior models. This new design features drum brakes on both rear wheels with the possibility of an upgrade kit coming to add one to the front wheel as well. While most people want to talk about “making a Trikke go,” when you live in a hilly area such as eastern Pennsylvania where I am, stopping the Trikke becomes just as important. The idea behind the new drum brakes is to provide just as much stopping power as the disk brakes without the difficulty of adjusting and maintaining them. These drum brakes are also shielded from road grit and gravel avoiding the squeaking and damage that sometimes comes from such.

The ridged, hard-plastic foot decks on the T10 are another eye-catching feature and another significant upgrade from earlier models. They are wider at the front and provide confident grip with a variety of foot positions. They end with a kick-tail and small rear fender. These will have great durability and not need the frequent replacements like the skateboard tape decks on the old T8’s and T12’s.

Much as I wanted to lead off with talking about the stunning new color, I thought it best to leave that until later in the article even though it has truly been the talk of the town. I have never met a shade of blue that I didn’t like, so when I ordered my T10 I knew I would be fine with whatever blue Trikke decided upon. The color changing blue-purple they selected is beyond my wildest dreams though, and sometimes I have to remind myself to stop staring at it and go ride it! Initially it looks very much like the medium metallic blue used on the late-model T12’s, but the metal flakes are more pearlescent. When the sun hits it, it turns into a vibrant purple that shifts and shimmers as you look from different directions. In the shade, it is a deep yet vibrant blue. The T10 is available in black as well. I have been told is also metallic with flakes of green, gold, and orange, though I have yet to see one firsthand. While the black still sounds quite nice, it does not have the color changing properties of the blue.

The T10 was packaged well for its cross-country trip, and assembly was quick and simple. In just under half-an-hour, I had it unpacked, assembled, and ready to ride. The main steps consist of attaching the handlebars and the front wheel and fork. I have a few points of advice on both. The lock pin on the front fork fell back into the frame the first time I tried to get it seated right. I had to pop off the plastic cap on the bottom of the main column to reinstall it, and then I more carefully repeated the fork installation. A few others have reported this happening as well which is why I wanted to note it. The handlebars require tightening just two hex bolts to secure them to the steering column, but my advice here is to really be sure they are on tight. I thought I had them tight, but my first carve saw them swivel loose. I am always afraid of twisting off bolt heads by going too tight, but trust me when I say this time you really have to be sure they’re as snug as possible. 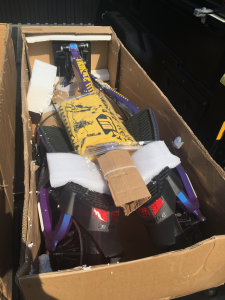 Once all the sub-assemblies are bolted together, you’ll need to secure the brake cables to the main column. There are six small, plastic clips in the tool bag to clip the cables to the small brackets on the frame. I had no problem snapping them into place, but others have reported breaking the clips in doing so. Should that happen, zip ties can be used instead.

With assembly complete, there were just a few remaining steps until the T10 was ready to ride. Safety comes first, so thoroughly test and adjust your brakes before heading out. The T10’s manual says the drum brakes should be fully engaged when the brake levers are pulled halfway. Mine were set perfectly for this from the factory, so I can’t comment on the easy of adjusting them. However, it is supposed to be able to be done very simply by adjusting one nut on each cable. Likewise, the riding position of the handlebars felt very natural to me the first time I stepped up on the T10, so I did not change anything. In terms of handlebar height and rotation, you’ll want to be standing in an upright position with your hands resting naturally on the grips. The handlebar height should be between your belt line and navel, and your arms should have room to comfortably rotate the handlebars side-to-side without having to stretch too far forward. As with all Trikkes, the final check before every ride is that the tires are properly inflated to at least 80 psi. I always use 90 psi on mine, though some riders say it’s safe to go up to 100.

The only essential not included with the T10 is a water bottle holder and screws, though it does come with the standard threaded mounts for such on the main column. I scavenged a silver cage off an old bicycle as a temporary measure, but later ordered a nicer blue anodized bottle cage which ironically arrived as I was writing this article. It’s raining today (again), so I will install and photograph that later. I will eventually want to add lights and a cargo net, but that is something that can also wait. I will likely just move what I already have from my T8 to the T10.

I rode the T10 a few times up and down my driveway just to be sure all was working well with it, but truly there is not enough space to get a good feel for it there. There wasn’t enough daylight left to hit the trail that evening, so I contented myself with drooling over the color, doing some photography, drooling over the color some more, and showing it off to my bemused neighbors. I had waited a long time for this mythical T10, but I was going to have to wait until the next morning to introduce it to the trail.