Part 5 of my “Trikke Test Drive” series found me rokkin’ it old-skkool on an early model T12.  I had just discovered Trikke Andy’s article and video about replacing the T12’s handlebars to better suit shorter riders like myself, which renewed my interest in the T12’s.  You’ll recall from an earlier test drive, I found the T12 to be too large for me, handling awkwardly and wobbly. 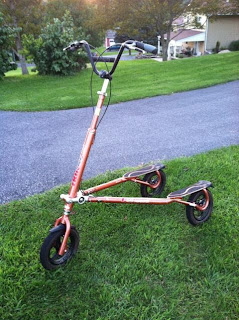 The day after being inspired by the video, fate delivered to me the opportunity to buy a used T12 for just $150.  The owner was moving and needed it gone “today,” so agreed to have a friend pick it up for me sight unseen.  I had figured I could sell it at a profit if I didn’t like it, but I’ve fallen unexpectedly in love with it!
The Trikke has a lot of scratches, likely from being moved around in storage, but mechanically is in great working order.  The front tire still has its seam line, which tells me it’s barely been ridden.  I’ve racked up 24 miles riding it three times this week, which is likely more distance than the original owner ever put on it.
This T12 lacks a lot of the amenities found on the current model, such as ergonomic hand grips, locking brake levers, water bottle holder, and rubber foot decks.  But it’s well-built with an aluminum frame, 12” tires, stylish rims, disk brakes, and wheel fenders.  The major difference is the steering system.  The narrower handlebars are set on a lower steering column, making it more suited to shorter riders.  This Trikke feels lighter than its modern-day counterpart, although I have not yet found the specs to prove it.

I put the T12 through its paces on three test drives this week.  The first was 9 miles lapping a school parking lot, which featured a lengthy 4-degree hill climb.  The second was a quick Friday night workout at Rodale Fitness Park, with 2 laps around the flatter inner loop, and 2 laps around the hillier outer loop (with its 4.5 degree hill).  The final was a grueling 11-mile ride on the hilly streets of Stroudsburg.  Some hills had to be walked up, but I was able to tackle a few in the 6-degree range.  I made it up a few hills that I had not been able to do on my last ride in the area.  My friends, who are both certified trainers, said I was riding better than ever, and believed that this T12 being a good fit for me was part of that. 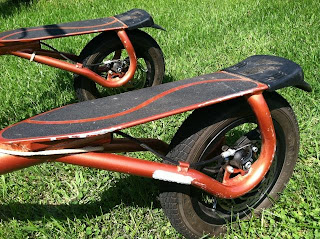 So it looks like this copper beauty is a keeper!!  I have already added the pull cords, which are an absolute must on older T8’s and T12’s whose locking mechanisms can be very hard to operate otherwise.  I will likely upgrade the handgrips next, because I was getting some blistering on the inside of my thumbs.  I’ve heard the sand-paper foot decks wear out easily, and when they do I will likely upgrade to the same rubber foot decks I enjoy on my T8.  I have the locking brake levers on order, and will swipe the water bottle holder from my T78.  Finally, I’ll add a cargo net and lights to fully outfit this Trikke for touring.
Overall, this older T12 is a true joy to ride.  Its design is more suited to short riders than the current model, and it can be easily upgraded with all of the modern accessories.  I had never envisioned myself as a T12 enthusiast until a few days ago, but this unexpected turn of events has completely won me over.
Related posts:
Trikke Test Drive – Part 1: T78, T8 & 12
Trikke Test Drive – Part 2: Tribred Pon-e 48V
Trikke Test Drive – Part 3: T78 Air vs. T78 Deluxe
Trikke Test Drive – Part 4: Pon-e’s Unplugged