Skip to content
HomeVehiclesTrikke Test Drive – Part 1 – T78 vs. T8 vs. T12
When I bought my Trikke T78 Deluxe earlier this year, I had done a lot of online research, watched a lot of YouTube videos, and snagged a great deal on eBay.  Yet I was left wondering if I had truly gotten the right Trikke for me.  I would never buy a new car, motorcycle or bicycle without test driving it, yet here I was buying a strange new fitness machine that I had never tried out firsthand.
All things considered, I got lucky.  My T78 arrived in great condition, and was ready to ride after I corrected some minor assembly issues.  It fits me well, and I enjoy riding it, but I still often ask myself if I bought the “right Trikke”.
Thanks to my friends at Trikke Virginia (http://www.trikkepro.com), I was recently able to find out.  We took my T78 to a parking lot near the Manassas, VA airport, along with a brand new T8 Sport, T12 Roadster and Pon-E 48V.  The Pon-E will be the subject of a separate article, as for now I just want to compare the fitness models. 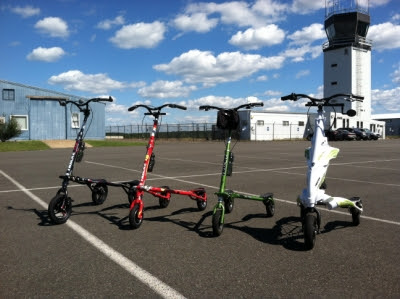 My T78 Deluxe (green) is based on a steel frame, weighing in at 24 pounds.  It rides on 3 air tires, and has better handgrips and handlebars than the T78 Air model.  I have upgraded mine with a water bottle holder and parking brake levers, although it still has the standard scrub brakes over the rear tires.  This is the Trikke I learned to ride on, and is my starting point for comparisons.
The T8 Sport (red) is close in size to the T78, measuring 2.0” longer and 2.4” wider at the rear wheels.  The T8’s handlebars are 0.9” wider than the T78’s, and have nicer bicycle-like hand grips.  The biggest advantage of the T8 is its aluminum frame and disk brakes.  Parking brake levers come standard on the T8, as does a water bottle holder.  The paint job on the T8 is high quality, with its graphics clear-coated instead of being stickers like the T78’s that will inevitably peel later.  It also has nicer foot decks and small plastic fenders.
I have been told by several people that the ride is very similar to the T78’s, but I felt more difference between the two than I expected.  Although Trikke says the T8 weighs 27 pounds, it actually felt lighter than my T78.  Getting it going from a dead stop was surprisingly easy, and I found it to be very nimble and responsive.  Whether maneuvering around the parking lot, or going up the steady incline of the access road, I felt really at one with the T8.  I switched back and forth a few times between it and my T78, and could really feel the difference in the T8’s width, and the extra carving power it gave me.
The T8’s disk brakes are very crisp and responsive.  The scrub brakes on my T78 are the only thing I don’t like about it, especially on the hillier trails of the Lehigh Valley.  This is my main reasons for considering an upgrade to another Trikke.  Despite recent weight loss, I still weigh over 200 pounds, and I sometimes wonder if my T78 is going to stop when I ask it to.  On the other hand, the T8 had no hesitation about bringing me quickly to a halt when needed.
The T12 Roadster has become immensely popular, and sometimes you get the impression it is the only Trikke that serious riders would consider.  For a modest price increase of just $100 more than the T8, it’s easier to fall into the “bigger is better” mindset when considering which one to purchase.  With that in mind, I had gone into this test drive session pretty well convinced I would decide the T12 would be my next Trikke.
The T12 (graphite) features the same upgrades as the T8: aluminum frame, disk brakes, parking brake levers, hand grips with bar extensions, a water bottle holder, upgraded foot decks, plastic fenders, and high-quality paint job.  It is the giant of the Trikke world though, weighing in at 31 pounds.  It is 7.8” longer than the T8, 2.2” wider at the rear wheels, and 0.6” wider at the handle bars.
It takes more effort to step up onto the foot decks which ride atop 12” wheels.  Getting this Trikke to go from a dead stop took considerably more effort than the T78 or T8, and I felt fairly unsteady with it during tight maneuvers at slower speeds.  I could feel its heavier weight and occasionally felt like I was fighting with its handlebars.  Once I got it up to cruising speed though, it felt better.  In fact, it was easier to maintain my momentum on the T12 than on the smaller Trikkes.
If I was going to cruise consistently on flat terrain with rare interruptions, I think I would be happy with the T12.  But the reality is I do a lot more stop-and-go, climbing and tight maneuvering than that on a typical ride.   With that in mind, the T8 is without a doubt the right Trikke for me.  This is not the outcome I expected, and it proves why a test drive is so valuable. 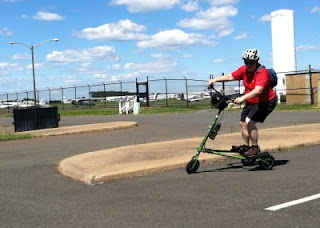 Everyone is different in terms of height, weight, proportions, fitness level and riding skill.  This is going to translate into the “right Trikke” being different for everyone.  You have to remember that I’m only 5’-4” tall with stubby arms and legs, riding at an intermediate skill level.  The T12 is a fine vehicle, but I never felt at one with it like I did the T8.  The T8 simply is the right fit for my body size and riding style.  Taller riders would likely feel that way about the T12, but the only way to know for sure is to try them both out before deciding which to purchase.
I now have the task of figuring out how to save up for the T8, because there is no doubt in my mind that I want one.  Not only does it ride better than the T78, but I feel strongly about wanting disk brakes in light of my weight, riding speed and the nature of the trails I am riding on.  I think the hardest part of the decision though, will be selecting the color.  The T8 comes in blue, red and silver, all of which look fantastic.  Decisions, decisions . . . .
I am very grateful to Beth and Preston at Trikke Virginia for allowing me the chance to compare these carving vehicles side-by-side.  If you are in the market for a new Trikke, please contact myself or Trikke Virginia and we will be happy to help you choose the carving vehicle that’s right for you.
Stay tuned for Part 2 of my Trikke TestDrive series, where I will review the Trikke Pon-E 48V.